Skip to content
Home>Blogs>7 Facts You Think You Know About Flood
Thursday, August 24, 2017

Being born and raised from a tropical country like the Philippines makes us used to flooding. By the time we’re 18, we think we already know everything about flood — its brown and murky color, its stench, and its devastating consequences.

Even Google doesn’t know everything about flooding. So while we’re still in a dry spell, sit back, scroll down, and discover whatever we need to know about flood. 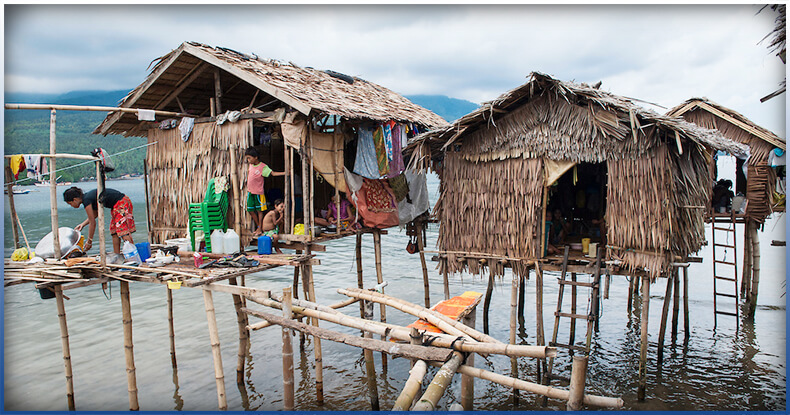 Perhaps, we’re experiencing intense flood not just because of the sea level rising. Perhaps, the land is sinking!

The very ground where your home is built is sinking. It is called “land subsidence”.

There are a number of factors surrounding land subsidence. In the Philippines, the primary cause of subsidence is the depletion of groundwater.

With the country’s growing population comes the much greater demand for water supply. Since Philippines does not have a renewable water source, communities are relying on water pumped from under the ground. As the groundwater level subsides, so is the land above that groundwater.

According to the University of the Philippines-Diliman National Institute of Geological Sciences, severe flooding in Metro Manila isn’t simply due to poor drainage, pollution, and intense rainfall. No one can deny that Manila is sinking.

Aside from Manila, other places in the Philippines like Caloocan, Malabon, Valenzuela, Navotas, Cavite, Bataan, Bulacan, and Pampanga are also facing the threat of subsidence.

If not addressed properly, these places will probably be like Venice in the near future — but with much garbage. 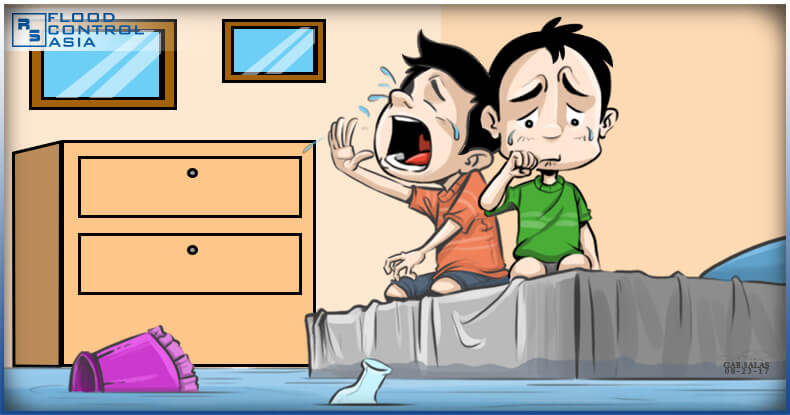 Developing countries are still grappling with the issue of flooding. To date, one of the most pressing issue they face is how to evacuate people in the shortest time possible.

A post from a popular blog claims that flooding can occur within six hours. If this is true, then, half of your waking hours is not enough to prepare for evacuation.

As reported by AccuWeather, the 2013 flooding in Missouri proved that floodwater can rise for up to 15 feet within 25 minutes only. The rate of floodwater rise depends largely on the source. If a community is sitting along a riverbank or any body of water, there is a higher tendency that flooding can occur in just a matter of minutes or hours.

Also, flash floods can occur when there is a 1-inch per hour rainfall rate. This is not as simple as having a 1-foot flood within 12 hours of rain. Drainage facilities must be able to handle a big amount of rainfall. If not, sudden gushes of flood water from torn down dikes or canals can result to strong surges that can breakthrough homes or even tall buildings.

Fact #3: No area in the world is flood-free. 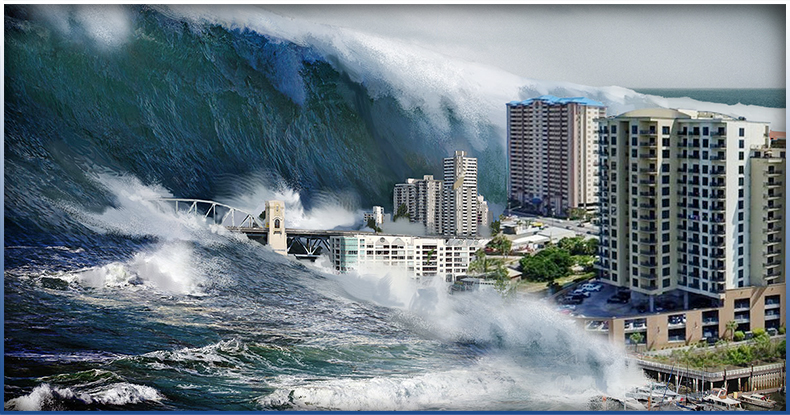 It actually depends on your definition of flood. If your definition of flood are raging waters from rising from a river, then you might really be safe if you’re on a higher ground. A study by the World Resources Institute (2015) said that India, Bangladesh, and China were the top three countries with high susceptibility to river flood.

Unknown to most of us, flood can happen even if you are not living along a riverbank. An uneven ground elevation can cause flooding, albeit in a minimal scale.

Unknown to most of us, flood can happen even if you are not living along a riverbank. An uneven ground elevation can cause flooding, albeit in a minimal scale.

Take this as an example:

Your house is located on a high ground, but there is a much higher elevation beyond your community. When it rains, your home can be a catch-basin, and you can be flooded with at least 1 foot of rainwater.

Faulty water installations can also cause small-scale flooding. A simple leak from a water pipe can turn a puddle into a pool.

What is the bottomline? Wherever you are, you are not safe from flood. Perhaps, the only place safe from flood is an elevator — and you don’t want to get locked up in one.

Fact #4: Even Developed Countries are Vulnerable to Flooding 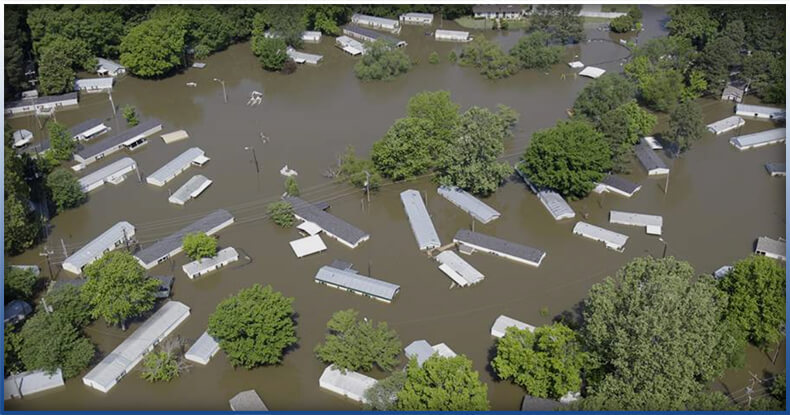 Since we’ve mentioned that no place is safe from flooding, we better clarify that not only third-world countries experience killer flood.

Even the United States of America has been experiencing deadly flood over the years. The most infamous was the Great Mississippi Flood in 1927.

Whatever happened in the Great Mississippi Flood made a mark in history. Encyclopedia Britannica says that after several months of strong rains in April 1927, dikes built along the Mississippi River collapsed. Floodwater from the river surged to communities, submerging 60,000 square km of land. The Great Flood of Mississippi killed more than 200 people and left thousands homeless.

To date, the Great Mississippi Flood is considered as one of the worst natural disasters ever to hit the United States.

The Great Mississippi Flood proved that even developed countries are vulnerable to flooding. It also strengthened the fact that flood happen not only in tropical countries. In fact, non-tropical countries have their own sort of weather disturbances like cyclones and hurricanes that cause flood.

Fact #5: Flood is not limited to water 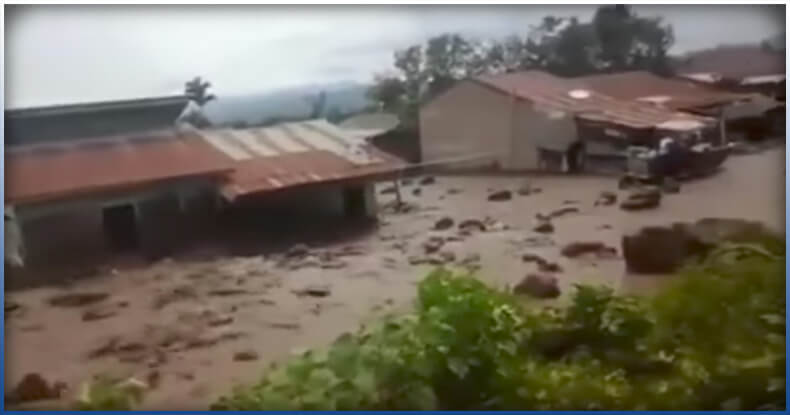 We’re talking here of water rising from the river, or rainwater rushing down on a certain catch-basin. Still, we have to consider that flood is not limited to water.

In June 15, 1991, Mt. Pinatubo in the Zambales Province released its fury. Seismologists sealed that fateful day in history as the second largest volcanic eruption of the 20th century.

As mighty as it was, the eruption released materials from Pinatubo. The volcanic flow got deposited on rivers and valleys, and were washed on to communities due to strong rainfall caused by Typhoon Diding (Yunya).

Houses, rice fields, and entire communities got buried in volcanic mudflow known to natives as lahar. Even up to this day, communities in the Province of Pampanga are facing a threat of renewed lahar flow due to strong monsoon rains.

Fact #6: Flooding can be permanent in the future. 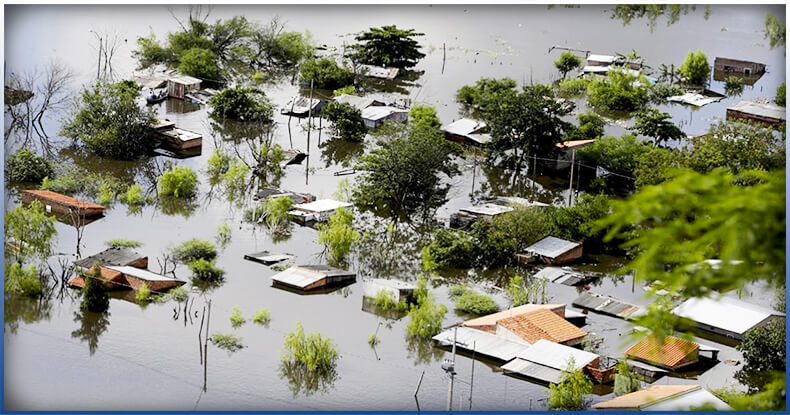 Let’s leave history behind and move to the present day. Climate change experts are saying that flooding can come more frequently now that weather systems are becoming more erratic.

In fact, places which are destinations-to-die-for are now facing the danger of permanent flooding.

It’s almost a common knowledge that climate change causes sea level to rise. Due to a steady rise of water level, a study says that New York can be permanently flooded in 2050 with or without strong rainfall. A mere 1 foot of sea level rise can flood at least 60 square miles of The Big Apple. Whoaah!

It is not only for New York. Places that are frequently flooded these days should expect worst scenarios due to the continuous rising of sea level, a report in National Geographic says. 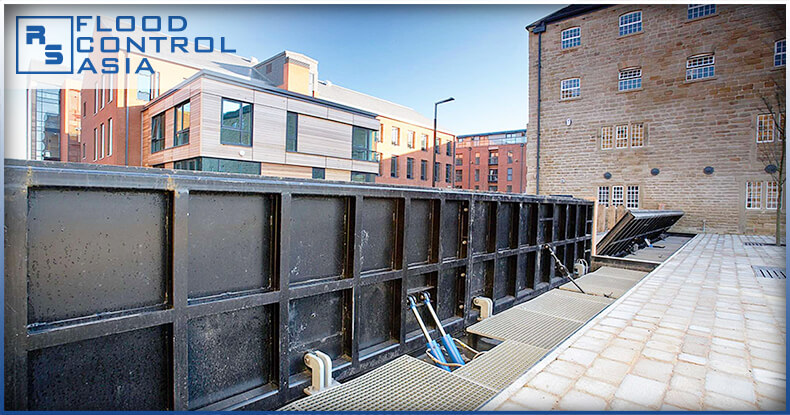 If you’re thinking that this piece is merely ranting about flood, you haven’t reached the end yet.

There is actually a solution to flood. Though this solution is temporary, it can protect you home from flood no matter how devastating it may be.

Various experiments on how flood gates can work have been conducted in Europe. These flood gates are now available in the country and some Filipinos have actually availed of these products.

One outstanding example is RS Flood Control Asia, a German-owned company that produces demountable flood barriers for residences, offices, and factories. These flood barriers come in different forms and sizes, perfectly suiting the varied needs of communities in a tropical country like Philippines.

Some industries and homes from as fas as Cagayan de Oro to as far as Cabantuanhave decided to install these flood barriers in the places.

If ever you are interested (and you must be interested!) check this link and know more about RS Flood Control Asia. It’s products are perfect for businesses that are targeting full and uninterrupted operations in spite of massive flooding.

Enough for this day, folks! You might have been shocked with some of this list’s trivia about flood. At least, in the end, we all know that there’s something we can do to ease our pains whenever it rains.

So next time that you find yourself in the middle of a flooded street, think about flood barriers.

This post was first published on Flood Control Asia. You can read the original version here.