Skip to content
Home>Blogs>How to Build a City That Doesn’t Flood? Turn it Into a Sponge
Friday, September 7, 2018

Cities encourage potentially devastating floods by laying down asphalt and pavement. Could this be avoided by making them “spongier” and more absorbent?

Urban floods make the news with alarming regularity. Just in the past few months, Hurricane Harvey submerged Houston, and the seasonal monsoon crippled cities in South Asia. Dramatic floods from increasingly severe storms come with a steep cost, both human and financial, and the problem will only get worse with climate change. One of the biggest culprits for the deadly toll these floods wreak? Urbanization.

As cities develop, miles of impervious pavement are laid over forest or wetlands, displacing the natural flood management systems like creeks, underground streams, or bogs. In a completely uninhabited landscape, rainfall integrates into the natural water cycle by four different ways: it either soaks all the way to the ground and becomes groundwater; runs down valleys into bodies of water and finds its way to the sea; is taken up by plants; or just evaporates. In urban or suburban sprawls with paved roads, highways, and parking lots, water has nowhere to go, so every heavy rain can turn into a flood.

The number of cities around the world is growing quickly. In her book, Replenish: The Virtuous Cycle of Water and Prosperity, Sandra Postel, the director of the Global Water Policy Project, reports that over the past 35 years, the number of cities in China alone has climbed from 193 to 653. As urban and suburban areas expand, the stormwater runoff problems will grow as well.

But now there’s a movement around the world to build smarter and “spongier” cities that can absorb rainwater instead of letting it flow through miles of pavement and cause damaging floods. From Iowa to Vermont and from San Francisco to Chicago, urban infrastructure is getting a reboot.

Creating better stormwater management systems requires using green infrastructure elements in urban planning and restoring some of the rain-retention capacity that cities have lost to urbanization. These elements can be roughly broken into two categories: the man-made engineered replacements of the natural water pathways and the restorations of the original water routes that existed before a city was developed.

Traditional road construction, made with asphalt, gravel and sand, is a very compacted structure that leaves little space between the particulates, and thus no room for the rainwater to seep through. In the construction industry that gap measure is described by the term “air void,” which is typically set at four percent for the traditional pavement mix, says Richard Willis, Director of Pavement Engineering and Innovation at National Asphalt Pavement Association.

One way to make cities spongier is to use permeable pavements, such as porous asphalt made with a lot of large stones rather than fine aggregates such as sand, and with added cellulose fibers to hold the porous asphalt together. This creates more pores, and increases the air void up to 15 or 20 percent, allowing more rainwater to seep through. Porous pavements are typically laid on top of stabilizing material and a gravel layer, which functions as a reservoir to hold and eventually disperse the water into the soil underneath. Because water trickles through the top layers of porous pavements faster than through the traditional pavement, studies have found that winter de-icing budgets have the potential to be lower. 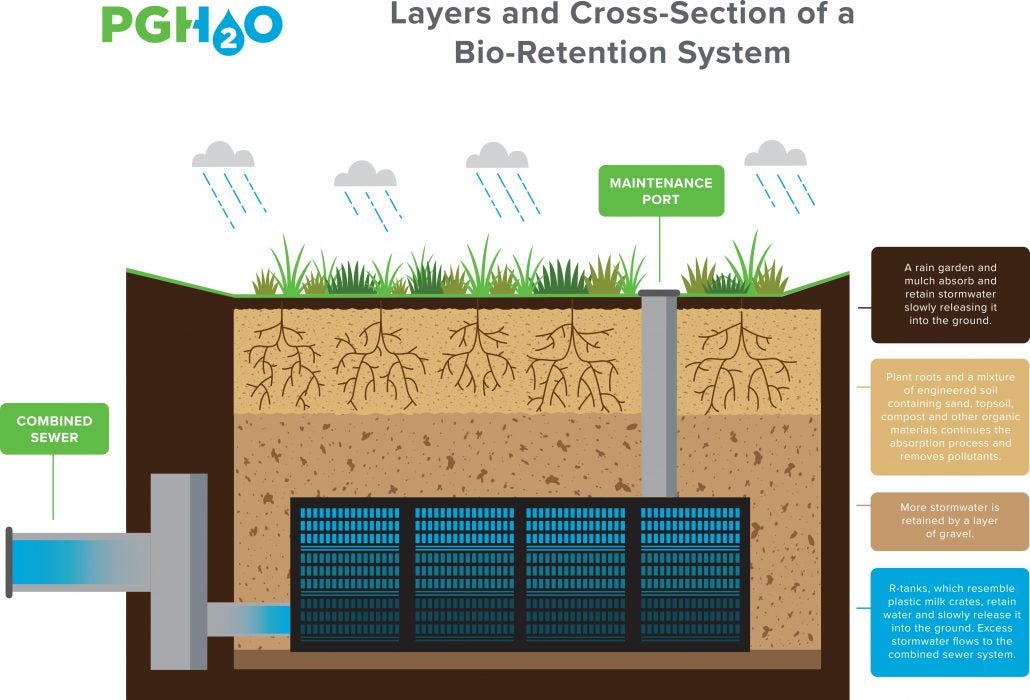 A diagram of a water retention system. Credit: Pittsburgh Water and Sewer Authority

Another way to make cities hold water is by building rain gardens and bioswales. A rain garden is a depression in the soil seeded with native plants that helps soak up rainwater. With that setup, house spouts can empty into a rain garden instead of a sewer, decreasing sewage overflows in heavy downpours. A bioswale is a rain garden on a larger, more engineered scale. It is constructed by creating deeper and larger depressions where water can temporarily accumulate and drain out slowly. James Stitt, sustainability manager with the Pittsburgh Water and Sewer Authority, explains that the retention of water is facilitated by a number of solutions. One is the soil medium (clay soils are replaced by more sandy compositions) and gravel. Another is a set of R-tanks—containers akin to plastic milk crates that can be stacked like Legos underground, capable of bearing large water loads and slowly releasing it into the surrounding soil.

To see how sponge cities could effectively work, take the example of Pittsburgh. For years the Steel City struggled with stormwater management. An aging infrastructure that served both storm and sanitary flow would go into overdrive when barely an inch of rain fell, discharging raw waste into local waterways. The solution Pittsburgh initially considered was to build a 12 to 15 mile-long tunnel in the bedrock beneath the rivers and along the riverfronts—to hold sewage overflows until the treatment plant would have the time and capacity to process the water. That solution was “gray”— meaning quite the opposite of green, Stitt says. But in 2013, Pittsburgh revisited the plan and opted for more sponge city elements, mimicking the natural hydrology of an area, and including rain gardens and bioswales in the design, Stitt says. 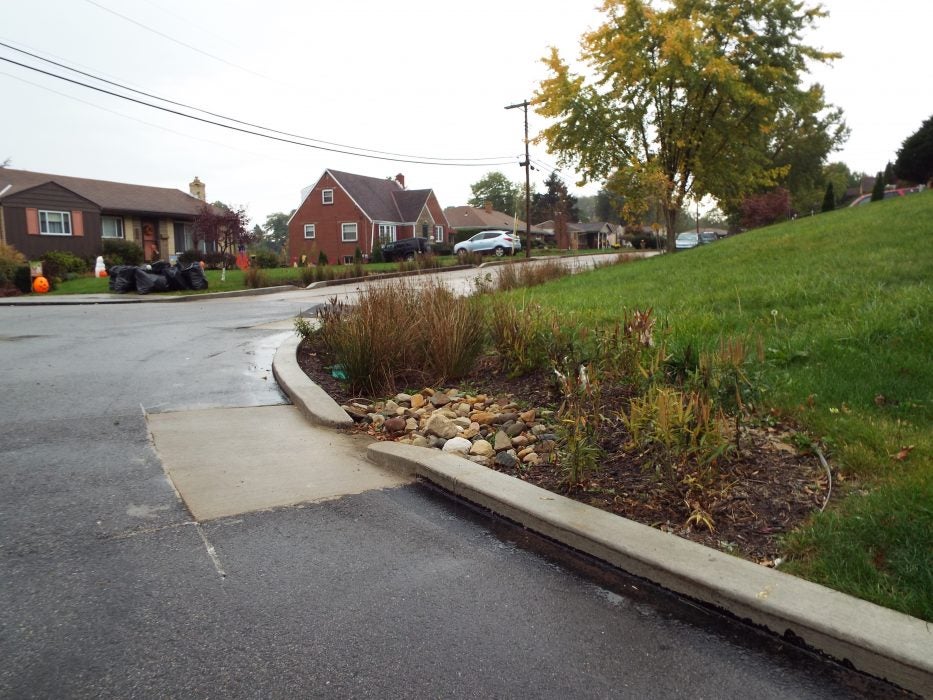 Green infrastructure for sponge cities can also include non-engineered solutions—such as restoring urban forests and increasing their ability to absorb stormwater runoff. In Seattle, urban planners got rid of invasive species such as English Ivy and Himalayan blackberries and restored native evergreens that do a better job of stormwater retention.

Seattle’s approach might have another factor working in its favor: cost. Engineered solutions, even green ones, cost far more money than planting trees, and require a continuous commitment from the city’s successive city administrations. Pittsburgh has seen a change in city government since the launch of the green infrastructure plan, but has taken care to get some early wins. For example, rain gardens and bioswales did not just help with stormwater management, they also won brownie points among town residents because of their aesthetically pleasing looks.“These evergreens stay green year-round and when it rains, as it does so often in Seattle, the trees intercept the downpour,” says Joanna Nelson de Flores, Green Cities Director for Forterra, the region’s land conservation society. “If that vegetation didn’t exist, all of that water would just slide off into our streams and rivers so the trees also act as a natural filtration sponge.” Restoring urban forest tracts proved so successful in Seattle that the Green Seattle Partnership made up of Forterra, city staff, volunteers, non-profit organizations, businesses, and community groups has expanded to eight additional cities in Washington State to improve their stormwater management.

For countries in the developing world, which are on the frontlines of climate change, the problem is more urgent and monetary resources are a problem. In these countries, solutions that follow the Seattle model are increasingly being embraced, says Sarah Colenbrander, Senior Researcher at the London-based International Institute for Environment and Development. From Kampala, Uganda to Bangalore, India urban wetlands and woodlands are being restored in many cities. The biggest stumbling block, according to Postel, is scalability: can one-off examples work on a larger country-wide scale? That can only happen with a significant boost from policy implementation and top-down legislation, she says.

Population and development pressures can sway sponge cities’ development. But a holistic approach ensures that zoning boards (which decide allocation of residential and business spaces), the parks department, and the transportation board take part in the same planning discussion. A cohesive implementation will go a long way in creating sponge cities. So despite difficulties, sponge cities are becoming more prevalent across the world. Chicago, for example, has instituted green roofs and bioswales as part of its green infrastructure modifications as has Philadelphia.Countries in Europe are following this concept too.Studies found that local building codes often create needless impervious cover while giving developers little or no incentive to conserve the natural areas that are so important for the natural water flow. The world needs to rethink its cultural expectations of what a prosperous and successful city looks like, Colenbrander says: “Is it a city like Sydney or Los Angeles where everyone has a white picket fence and a nice garden? Or is it a city more like Hong Kong or even central London where people live much more densely and have a communal green space together so you have less of an ecological footprint?”

“If the twentieth century was the age of dams, diversions, and depletion,” Postel writes in her book, “the twenty-first century can be the age of replenishment, the time when we apply our ingenuity to living in balance with nature.”

This blog was originally published by JSTOR on December 5th 2017. Read it here.